In the past few weeks, Singapore has been struck by haze and to lift the mood of the gloomy days, a friend of mine even came out with a joke: “Do you know we just received free ice-cream? The brand is ‘HAZE-跟-DUST’ [HAZE-GEN-DUST, ‘跟’ means ‘and’]”… We burst out in laughter but it was not long before we had to stop. The laughing made us breathe in more of the polluted air and we started to feel the choking sensation. Nevertheless, this matter is not one that we can laugh it off and treat it as a joke. The country started to feel the effect of the haze with some people falling ill and others have their major outdoor activities cancelled. During the period, the Pollutant Standards Index (PSI) went up to a 3-hr PSI of 249, at 2100hrs on 14th of September 2015 (Channel News Asia, 2015), which is within the very unhealthy air quality category. The PSI value and the air quality description are as seen below: 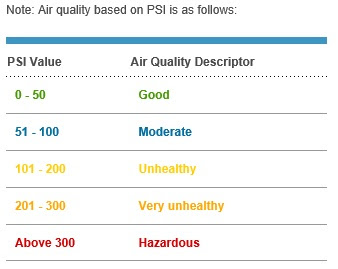 So how bad was it at the source? In Pekanbaru of Indonesia Sumatra island, it even went up to PSI of 984 (The Straits Times, 2015). Can you imagine that PSI at 900+???? How do you even live there! The haze actually contains many harmful substances to the body, examples like carbon monoxide, sulphur dioxide, ozone, nitrogen dioxide and particulates… In the case of PM2.5, it refers to particulate that are of size smaller than 2.5 microns. How small is it? It can enter the alveolar space of the lung and get stuck in there and also possible to cause inflammation in the lung tissue. 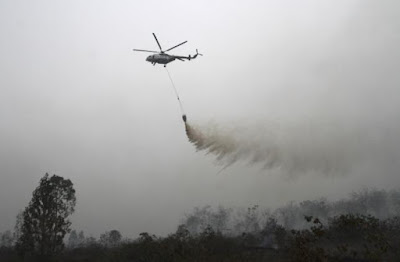 What caused the haze?

The fire were set, as a form of slash and burn practice, to clear land mainly for agricultural use. This method allow the rapid discharge of nitrogen that can be used as fertiliser for the crop and also at the same time burning and killing any pest or weeds that is present on the plot of land (Quah, 2002). However, this practice creates much more negative impacts, like haze, biodiversity loss, health problems, other economic loss (eg. in tourism) and expenditure to counter the wild fire, that affect not only the locals but also regional countries. Therefore, the local authorities should put in effort and do something about it to stop the irresponsible arson which causes extremely large area of lands to be burn down uncontrollably. On our part, we should condemn these actions, which are irresponsibly carried out by individuals or organisations, and on the other hand, support those that adopt the strategies of sustainable development and also care about the environment.

The following is a personal review of the article, “The effects of urbanisation on coastal habitats and the potential for ecological engineering: A Singapore case study”.

Article Link: http://dx.doi.org/10.1016/j.ocecoaman.2014.11.006
In the article, Lai et al. (2014) mentioned that during the expansion of cities, like Singapore, land reclamation may be exercised to provide sufficient space required for developments. However, they also mentioned that the anthropogenic activity take place at the expense of the natural coastal habitat and the biodiversity available at these locations. As lands are being reclaimed, these natural coastlines are replaced with artificial shores and coastal defence structures. In cases whereby conservation is not viable and development is inevitable, ecological engineering can be implemented in these man-made features in order to help to reduce the magnitude of the environmental impacts. As Singapore is a small island country surrounded by waters, the additional lands needed for development are acquired through reclamation and it will be feasible to adopt such an approach that can attain the economic interest and yet minimising environmental impact and also able to help maintain biodiversity.

Tropical marine species are observed to have assembled at the artificial coastal defence structures, like the seawalls, in Singapore, but the diversity of the species present on these synthetic sites were less diverse than that of the natural shores (Lee et al., 2009). The availability and distribution of the species were limited by the lack of habitable conditions. The construction materials, gradient of the slopes, complexity of the surface and physical conditions, like wave exposure, are attributes that affect the habitability of these artificial structures (Chapman & Underwood, 2014). Ecological engineering looks into these areas of constraints and facilitate the design and construction of these artificial structures to be more accommodating for the biological communities and less detrimental to the environment. In addition, transplantation of nursery-reared reefs onto these infrastructures can further assist in the recolonisation of the reef species that were loss during development or land reclamation and hence, enhancing the structures’ ecological value (Ng et al., 2015).

Nevertheless, more research needs to be done to better understand the consequence of these enhanced artificial habitats, like the interaction between species within the new habitat or any possible undesired effect from unnatural assemblages (Chapman & Underwood, 2014). As different species have differing sensitivity and susceptibility, not all species of the original habitat will be able to accommodate to the new artificial habitat. Therefore, the conservation of the natural habitat is the better approach while ecological engineering of artificial structures is an alternative in the effort to reduce the environmental impact and to retain a certain level of biodiversity.

We would have come across or maybe at least heard of the term “sustainable development”.  In Singapore, this term has been introduced in 1960s by the leaders of the pioneer generation (MEWR, 2015). It is what which was done progressively since then that give rise to what we have in the current modern society of Singapore. In order to achieve sustainability, none of the three pillars – economic, social and environment (MEWR, 2015) – should be underestimated and neglected of its values. However, as learned, I would like to emphasise that the economic and social capital that one is able to achieve are built upon the environmental capital that are available for us. Therefore, the environment forms the basis for sustainable development.

Though Singapore contributes to less than 0.2% of global carbon emission, our small size of only 718.3 km2 [compared to the whole of our planet Earth’s surface area of 5.10006 x 108 km2 (NASA, 2015)] and the dense population of more than 5 million have landed us at the position of 27th out of 137 countries based on the International Energy Agency 2011 data for carbon emission per capita (National Climate Change Secretariat, 2014). This reminded us that regardless of size, it is important that we reduce the amount of carbon emission in an effort to ensure a sustainable and liveable environment.

I strongly believe that having a sustainable development is the key to ensure that there will be a liveable environment for us and also for our future generations. To achieve sustainability, there should be more exposures of the communities to green programmes and, at the same time, education needs to be provided for the people of the current generation with regards to the importance of protecting and conserving the environment. The realisation of the importance of the environment is a significant step for individuals to hold the responsibility to play their part, like reducing wastage and conserving energy and water.

I trust that integrating greeneries to living areas can bring us closer to the environment [though still man-made] and constantly remind us of the importance of conserving the natural environment. Such integration can be through the construction of “green” buildings and creating more “green” spaces especially in the heartlands where human population are dense. It needs to be noticeable and of sufficient scale in order to achieve the desired effect.

SUGGESTION: Maybe we can have “green” bus stops and “green” playgrounds?

Note: all green mentioned here is definitely not referring to the colour green, but rather it refers to having plants that make them green…

A Part We Can Play!

This week, I came across an article of a speech given by Ms Grace Fu, Second Minister for the Environment and Water Resources, during the Singapore Green Hotel Award ceremony held on 27 August 2015 (Ministry of Environment and Water Resource, 2015). In her speech, she discussed the importance of creating a sustainable and liveable environment in Singapore. She also mentioned the practices that hotel managements have adopted to become more eco-friendly. This rings a bell in my mind that we have stayed in hotels before and we could have done our part as well.

Hotels provide many items which are disposable, like toothbrush, toothpaste, comb, shaver, shower cap, body soap and shampoo. We as guest of the hotels can reuse some, or in fact all, of these items. We do not need these items to be replaced every single day. For example, back at home, we use our personal toothbrush for 6 months before changing it and we don’t throw our combs away after use. [Change only when required]

The unnecessary disposal of such items can create a large amount of waste. If a hotel had 200 occupants who stayed for 3 days and had these items replaced each day, at the end of the 3rd day, a total of 600 sets of these items were disposed. The usage could be reduced significantly by 400 sets if each guest were to play their part in reusing these items. Furthermore, the lifespan of these disposable items are usually beyond the accommodation period and guests should bring them home rather than leaving it behind to be treated as trash.

(Of course do ensure these are reusable complimentary amenities and also take note that some items are “pay when used!)

This reminded us that we can play a part in reducing wastage through the little actions that we can contribute.

Singapore, a country with land area of 718.3 km2, total population of more than 5 million and Gross Domestic Product of S$390.1 billion (Singapore Department of Statistics, 2015), is where I call home. The little island is located in the Southeast Asia, just south of West Malaysia and east of Sumatra, Indonesia. This region of Asia is also the place where the tropical rainforests and the homes of many wildlife species are found.

Given its small size and situated near the equator, Singapore does not have 4 seasons and the temperature of this tiny piece of land ranges from 25.3°C to 31.6°C (Singapore Department of Statistics, 2015). It is hot throughout the year [when compared to countries with winter and spring] and I believe this can be a reason why we are “red” [associating red with infrared and heat].

Hundreds of years ago, this tiny piece of land was covered with rainforest, but today, it is a bustling city packed with high-rise buildings for commercial and residential purposes. Singapore did not forget about the importance of having a “green” environment and spaces were set aside for nature reserves and the building of parks. These green spaces are situated all over the island and the total size assigned is equivalent to 0.8ha of parks per 1,000 residents (Ministry of National Development, 2013). Therefore, Singapore is known world-wide as a Garden City.

I strongly believe that urbanisation requires the inclusion of green areas to make it livelier. Imagine living in a place without greeneries and that nothing around you is lively and all you see is just concretes. I don’t think I would be happy living in that kind of environment. Cause it will also be very HOT!!!

What do you think?